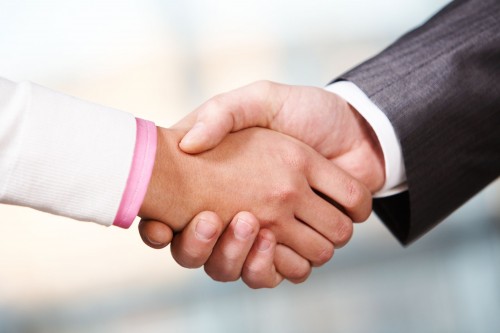 Shaking hands is such a sales basic that it’s amazing how often people get it wrong. And a bad handshake doesn’t just start a relationship off on the wrong foot (so to speak)—it can haunt you forever. Because people remember bad handshakes. A poor handshake can even cost you the sale.

What exactly constitutes a bad handshake? Here are twelve mistakes to avoid.

1. The Wet Noodle
A limp handshake conveys a lack of confidence and competence. And it just plain feels icky. Put some life in your wrist and fingers.

2. The Vise
This is the opposite approach—the death grip. It’s a blatant attempt to assert dominance. After being on the receiving end of one of these, most people will avoid you at all costs.

3. Hand over top
This is a more subtle way to assert dominance. By using an overhand grip, you force the other person to use an underhand one, which is ever-so-subtly submissive. Which can make them feel uncomfortable and trust you less Instead, offer your hand with your palm to the side. Or extend your hand in an underhand fashion, giving them the opportunity to be in the dominant position. It will make them feel more comfortable and confident.

4. Double hand
Using both your hands to completely enclose theirs is a classic politician’s move. Which is exactly why you should never do it. It reeks of fake sincerity.

5. Grabbing the arm or shoulder
Another common political tactic. Using the left hand to touch the forearm, upper arm, or shoulder is supposed to engender rapport, but unless you already know the person well, it typically feels like an invasion of their space. Keep your left hand out of the shaking process altogether. (Its feelings won’t be hurt.)

6. Pumping
Enthusiasm is great, but vigorously pumping your hand up and down is too much of a good thing. You’re saying hello, not trying to extract water from the ground.

7. Refusing to let go
This is yet another power play. Holding on to their hand well after you should have let go makes people feel trapped. And the message it sends is that you may trap them in other ways.

8. Finger grab
Grasping someone’s fingers instead of their palm signals that you weren’t’ paying attention when you reached for their hand. Which means you probably won’t pay attention in other parts of the sales process. You don’t need to stare at your hand as you extend it, but use your peripheral vision to guide your palm into theirs.

9. Probing
I’ve never personally experienced this, but I’ve heard a lot about it. The other person “probes” your wrist with their index finger. I have no idea why anyone would do this, but apparently some people do, and those who have been on the receiving end describe it as “weird,” “creepy,” and “revolting.”

10. Avoiding eye contact
Eye contact is critical to rapport. Neglecting to make eye contact when shaking hands is detrimental to it. Be sure to look the other person in the eye. Smiling is a good idea too, while you’re at it.

11. Wetness
This is a common problem at networking events. If you’re right-handed, you’ve been holding your drink in your dominant hand, so when you need to use it for a handshake, it’s cold, wet, and clammy. The solution? Hold your drink in your left hand instead. By the way, if you’re one of the 2.8% of the population who suffer from hyperhidrosis (excessive sweating) keep a handkerchief handy at all times. (Get it? Handy?)

12. Being culturally insensitive
The above guidelines are for America and Canada. Handshake etiquette is different throughout the world. So if you’re traveling, don’t assume everyone shakes hands the same way. In some cultures, people use a very gentle grip as opposed to a firm one. In others, only people of the same sex shake hands. And still other cultures prefer not to shake hands at all. Do your research so you can be respectful. Respect is a tremendous rapport-builder.

Your handshake sets the tone, not just for the immediate encounter with someone, but for your entire relationship with them. Set the right tone with a confident—but not overbearing—handshake. You don’t need to dominate the other person, you need to connect with them. And a courteous, respectful handshake will do precisely that.