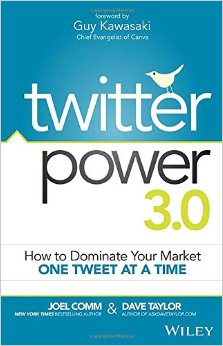 With more than a billion accounts, Twitter has changed the social, business and media landscape. CEO’s, celebrities and world leaders tweet regularly. CNN, ESPN and other media outlets routinely reference tweets on air. And the term “hashtag” has become part of the modern lexicon.

But while Twitter offers tremendous sales and marketing opportunities for businesses of all types and sizes, too many companies are either not using it well or avoiding it altogether.

Seeking to help companies make the most of Twitter are Joel Comm and Dave Taylor in their newly revised Twitter Power 3.0: How to Dominate Your Market One Tweet at a Time.

Comm and Taylor are legitimate Twitter gurus. Both joined the microblogging site back in 2007, before most of us had even heard of it. Today, Taylor has more than 12,000 followers and Comm—who wrote the first version of Twitter Power in 2009—has more than 82,000. And their Klout scores are in the top 1% of online influencers. So these two know a little something about social media in general and Twitter in particular.

Twitter Power 3.0 is a comprehensive guide to the platform, covering everything from setting up your account to maximizing its impact for your business. If you haven’t yet joined Twitter—or if you’ve barely used it—chapters 3 through 5 will take you step by step through the process of getting started. The authors show you exactly how to:
• choose the right user name,
• create an inviting profile,
• write an effective bio, and
• begin to build a following.

If you’re a more seasoned Twitter user, jump right to chapter 6: “The Art of the Tweet.” Comm and Taylor discuss what makes a good tweet, style rules to follow, and basic Twitter etiquette. If you want to engage current and potential customers, you need to tweet in a way that is friendly, personable and approachable:

Businesses that tweet like a corporate executive addressing a board meeting will stand out on the site and scream that they have no idea what they’re doing— or whom they’re talking to.

The chapters that follow explore strategies to:
• build your brand,
• get more retweets,
• drive follower behavior,
• solicit feedback from your customers, and
• make actual money.

Throughout the book, the authors use case studies and screen shots to illustrate their points. Comm and Taylor share examples of companies that use Twitter well—so you can adopt their approaches—and companies that don’t—so you can avoid their mistakes. This is particularly important, because as the authors point out:

Firms that get social media wrong look like interlopers, uninvited guests who have gate-crashed the cool people’s party. That doesn’t just mean that they’re missing all of the opportunities that the social media site offers. It can also show that the company just doesn’t get it. That could have as negative an effect on its sales as good tweeting can have a positive effect.

Getting social media “right” isn’t all that difficult. It requires an understanding of your market and what they want from you as a brand, as well as a willingness to listen and to be “human.” In short, it means being “social.” Which is the real value of Twitter and other social media sites:

What Twitter supplies isn’t a tool for making money online immediately and with little effort. Twitter delivers something much more valuable. It provides the basis on which all successful businesses are built. It delivers trust. There really aren’t many other services that can take entrepreneurs so easily through the process of “Know me. Like me. Trust me. Pay me.” and with so many people.

Thousands of savvy companies have already harnessed the power of Twitter to boost their sales. With Twitter Power 3.0, you can join them.