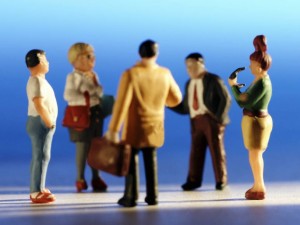 Networking is one of the best prospecting tactics around. Like any tactic, however, it can be used effectively or poorly. Poor networking isn’t just a waste of time, it can actually hurt your sales, because over time, you’ll develop a negative reputation.

Here are ten big mistakes to avoid when you’re networking:

1. Not spending enough time doing it
Like other marketing and prospecting tactics, networking requires consistency. The more you do it, the better your results. If you’re not actively building your network, you’ll lose sales to the competitor who is.

2. Going to the wrong events
But just going to events isn’t enough. You need to network strategically by attending the right events—the events that your ideal prospects attend.

3. Talking to people you already know
Nearly everybody has a fear of talking to strangers. (Thanks for the incessant warnings, Mom and Dad.) It’s so much easier to talk with your friends at an event. That isn’t what you’re there for, though.

4. Spending too much time with each person
Again, because we fear talking to strangers, once we do introduce ourselves to someone new, the temptation is to talk with them as long as possible. But doing that prevents us from meeting others. (And one of those others could be your next customer!)

5. Talking too much
Everyone loves to talk. But talking doesn’t build rapport. Listening does. When you ask questions and listen to the answers, the people you meet feel more comfortable and begin to like you. By contrast, when you monopolize a conversation, people stop listening to you and begin thinking, “How can I get away?”

7. Failing to ask for cards
If you don’t get a card from the people you meet, you can’t follow up with them. You might as well have not met them in the first place.

8. Bringing too few cards
And when you ask for a card, you had better have one to exchange. Few things say “unprofessional” more than not having a card at a networking event.

9. Getting drunk
One thing that does say “unprofessional” more than running out of cards, is getting slovenly drunk at a business event. If you’re looking to ruin your reputation and become a laughingstock, getting hammered at a networking event is a sure-fire way of doing it.

If you’re making any of these mistakes regularly, the good news is they’re all relatively easy to correct. (Except number 9. If you struggle with that, get professional help. Seriously.)

A little planning, a little courage and a little practice can make a huge difference in your networking. Which can lead to a huge increase in your sales.