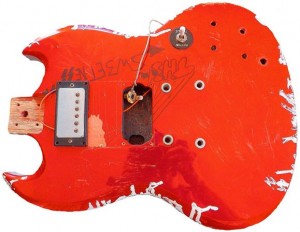 In March of 2008, musician Dave Carroll—of the Halifax-based band Sons of Maxwell—was seated on a United Airlines plane at a gate at Chicago’s O’Hare airport when he heard another passenger exclaim, “My God, they’re throwing guitars out there!” He looked out the window just in time to see a ground worker tossing one of his guitars, which landed on the ground. When the band arrived in Omaha late that night, Carroll discovered the base of his $3,500 Taylor guitar had been smashed.

Over the next nine months, Carroll spent hours talking with United personnel in multiple offices, trying to get them pay for $1,200 in repairs to the damaged instrument. But after a long bureaucratic runaround, he was told that, while they were sorry the incident happened, United would not compensate him.

Finally, Carroll decided to do what musicians do best: write a song.

“United Breaks Guitars” debuted on YouTube on July 6, 2009 and in the space of a week was viewed more than 2½ million times. The story was reported in newspapers and on news shows all over North America, adding fuel to the fire.

This is precisely the sort of publicity United would prefer not to have, but they have only themselves to blame. For a paltry $1,200, United could have prevented this public relations debacle and kept a valuable customer happy.

It’s one of my mantras: Sales is service and service is sales. They’re two sides of the same coin. The better your customer service, the better your sales will be. And the converse is true as well, now more than ever, as customers have the ability to air their gripes to the entire world.

To United’s credit, they’ve publicly stated that they intend to make things right with Carroll and they’ve asked him for permission to use the video to improve their customer service training. Although really, both actions are a little late. United should have resolved the problem immediately and they should have been investing more time and money in training in the first place.

Better late than never, of course, but United’s inadequacies on both counts have resulted in an awfully high cost to their reputation.